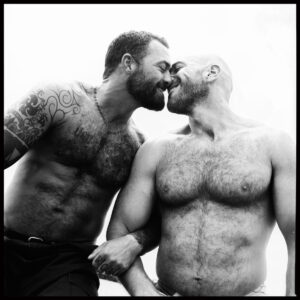 Don’t miss the 12 pages of photos in this portfolio.
Hit one of the NEXT buttons or use the page number navigation at bottom.

Paul Specht has been to many Bear Weeks in Provincetown with his inner circle of friends which includes a number of bigger guys. He says they simply always, “feel so at ease. And no judgement,” which is not a given almost anywhere else. His description is a space where much happens with the best intentions. He calls that space “a sanctuary,”that has brought his group back for 12 years.

Specht’s example is the positive vibe created by an unexpected “Hey great shirt,” from across the street; Someone who just says, “You look great.” It’s good vibes without the demanding of them by the young and performative “good vibes only” legions. As always, better things come from just doing whatever it is.

And that’s the spirit in these pictures from Bear Weeks between 2007 and 2015. It’s what holds up, gay bear culture. These micro acts of kindness are effectively the opposite of micro-aggressions. And why shouldn’t aggregated micro acts of kindness form a compelling opposite of a hostile environment? Why wouldn’t all the little ways we can find more things beautiful or sexy in more ways aggregate into more and better connections? Why wouldn’t every minor act of inclusion aggregate into more connections and healthy relationships?

Those attempts to build a more inclusive, kinder, more nurturing environment was intentional and the result of organizers who worked hard, expanded slowly, set a tone and fought pressures to mimic things happening at mainstream events. And that continues today.

The bears in these photos get most of it right. In this modern culture, even in 2021, they hold room for the romantics and the promiscuous; semi-annoying people are more tolerated; those with trauma — current or past — can be accommodated better and even find grace. Bears include the young and clueless to those almost unable to attend, they are so over it all. Boots. Flip flops. Athletic shoes. Heels saved and packed away to wear first in Provincetown. Meanwhile others meticulously review the plan for every meal. White collar bears and Blue. All American baseball bears nod to ivy educated commie pinko ones. The furries frequently make common cause and frequently attend. Chasers are a thing. Muscle bears have been much discussed for their hotness and for the threat they pose, suggesting hierarchy.

For a hot take on where the bears are (as in emotionally, not “I want to go where ….”), check in with the customary posting of arrival videos and messages posted by hundreds of bears while en route . Excited, optimistic, cautious at times, folks say what they are excited about, what they are a bit unsure on, and not one of them goes without acknowledgement.

The good attitudes are kiki’d and encouraged. Insecurities aren’t quashed, but acknowledged and constructively mentored, for example the fears of bigger guy who doesn’t have many opportunities to feel sexy on a dance floor, wants to but needs a little encouragement to get there and to wear the outfit they obviously see themselves in.

The bears posture less, try to stay away from shaming or challenging, and make an effort to keep the peace. There is no pretending that some real jerks exist outside the sanctuary limits and that most of the bears have plenty of experience dealing with insecurities and other fallout of cruelty and rejection that came with trying a new social thing in the past. So they relate and make a suggestion on how to navigate and typically will make an invitation.

These images are clear and relatively modern. They might be us, but enough little things give a sense that they are not of this moment. Instagram is not yet creating daily things to compare to. Trump has not made nasty and rude a valid choice yet. Shot between 2007 and 2015 when the gay bear events were already growing, but prior to a few political and technology trends that are not part of the gay bear vibe. And we’re not too too far gone to turn back time.

Let these guys and these fine images inspire some bear choices, some acts of micro kindness and care. Some Cher and some sharing. Help build a forcefield of microkind actions into a sanctuary for yourself and others this week. Have some fun. Indulge in what your health status allows, dance, make a new friend, compliment someone you don’t know. Flirt confidently and frequently. Have seconds. Share them. Swim in the ocean. Hang out at a pool. Wear next to nothing if you want. Or put on a Caftan. Make a costume or throw some pots, whether you’re at Provincetown’s annual week, one of the Bear Events or the unsanctioned Bear Week in your brain.

Thank you, Paul for letting us show this work. More info on the artist and where to see his work and to reach him is below and at the end of the pages. And it’s worth making it all the way through, eh hem. For a bit of the back story at the end.

Paul Specht (Bio Below) Paul currently resides in the Pioneer Valley of western Massachusetts with his husband Eric.

Current Project The Self Portrait Series Book available on Blurb