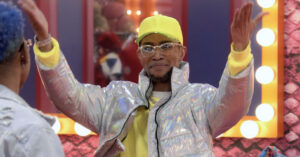 If there was any gripe remaining about the talent of this cast, this week’s episode of RuPaul’s Drag Race All Stars certainly erased any lingering concerns. A slam dunk of a maxi challenge, a beautiful runway and runtime dedicated more to performance than pettiness, helped showcase just how fierce these queens really are.

While most got a chance to shine either in the challenge or runway, this week’s episode really revolved around Jan. We have some fun here at Jan’s expense, mostly due to her inability to hide her intense need to win, even as she is swearing, no, really, she is totally chill now. Gentle ribbing aside, Jan is an unquestionably talented, hard working queen. It’s just our queer duty to take the piss out of anyone taking something so seriously, especially drag.

Jan’s journey is the crux of the episode around which all other parts rotate, even if it forces some story beats. Regardless, this was a delightful challenge, maybe one of the franchise’s best.

Everybody off the field! Let’s dig in.

Catch up with all of our RuPaul’s Drag Race All Stars coverage.

OK, is it reductive to make a bunch of jokes about queer people being bad/disinterested in sports? Hmmm, maybe. But, there’s also an undeniable kernel of truth there too, isn’t there?

RuPaul, of course leans into it, but the real joke is how this challenge will be using songs generously donated by an artist waving all publishing fees — the great RUPAUL.

But these are RuPaul tracks like you’ve never heard them before! On the radio! At a Dave and Buster’s! Reimagined in the style of some of pop’s all-time biggest divas and artistes. Instead of the singular artist Rusical we’re used to, this allows the queens to embody a wide variety of styles, and it’s surprisingly delightful to hear Ru’s songs through these different musical lenses. It’s a refreshing, TikTok-inspired spin on a lip sync challenge.

The gals all choose their icon, and there are some really good options in the mix. Kylie takes a bold swing at Steven Tyler; Scarlet is Katy Perry in full Left Shark; Ra’Jah embodies Ru favorite Diana Ross; and Eureka picks Madonna. For most of the prep and rehearsal with Jamal Sims, we barely so much as check in with this group. They’re all fine!

The bulk of the episode focuses on the other half of the queens. Pandora takes what I consider to be a pretty risky move choosing the first Super Bowl halftime entertain-ter (and first-ever Snatch Game favorite), Carol Channing. It might feel a little “been there, done that,” but seeing it live, truly no one else could’ve done it justice. Yara also sticks to her comfort zone, taking on Shakira (an act she does regularly in Vegas) and even overruling Jamal’s choreo.

Ginger gets sidled with portraying Fergie, the least distinct of all the available characters. She looks the part, and she does her best to infuse the performance with energy, but it’s got the least to work with, both in inspiration and script. (I want to personally speak to Ru’s writers for failing to include a “Let’s play some basketball!” reference here.)

A’Keria is out to re-establish herself after last week’s bottom showing by showing her bottom as Prince. It’s another daring risk, but there’s potentially big reward.

However, the whole ep focuses on Jan’s Jandetta. Will she be able to Janslaughter her “safe” curse once and for all? She chooses Lady Gaga to emulate, which almost feels like an unfair advantage. Jan relishes all the ways she’s similar to Gaga, and she’s not wrong. They both have a theatricality and, truly, “live for the applause.” Jan is singularly focused and seems unstoppable …

… Until Trinity. Good golly. Trinity has her own history to avenge. Remember when she said she wanted to be Beyoncé in Vegas, and Bianca said she looked more like Sammy Davis Jr. in a wig? It’s ok if you don’t. For me, it was just one of dozens of Bianca’s barbs, but to Trinity, it really hit hard. She’s determined to close the show and — finally! — give Drag Race a Beyoncé performance worthy of Queen B.

AND BOY DOES SHE DELIVER. I say this completely honestly: Trinity’s performance gave me actual chills! On Drag Race! During a Super Bowl parody! To a RuPaul song! That’s how good it is. She looks flawless, dances better than most B-level pop stars (looking at you, Dula Peep) and doesn’t just close the show; she destroys it.

Unfortunately, as Valentina sort of said: a Trinity win does not make sense with this episode’s Jantasy. It’s a close call between them, but the judges ultimately go with Jan for the much-delayed win. I personally would’ve went with TKB, or maybe even a split win!

But that’s not the only odd judging call. Joining Trin and Jan in the top is … Eureka? Um, ok. It’s not that Eureka wasn’t good, but so many other performers were more memorable. Both Pandora and Kylie deserved recognition more than the Elephant Queen.

The bottoms are all over the place, too. Ginger’s nondescript Fergie makes sense here, but she’s joined by Yara and A’Keria. The judges’ beef with Yara is her lackadaisical facial expressions, and they find fault with the lack of funk in A’Keria’s Prince. There definitely could’ve been a little more oomph in both performances, but less compelling than Scarlet’s Katy Perry? I think not.

Ultimately, Ru puts A’Keria and Yara in lipstick contention. Jan faces off against season two’s Jessica Wild to lip sync to (#free)Britney Spears’ Circus banger “Womanizer.” Jan really commits to a spastic robot routine, but it doesn’t heighten or have any real payoff. (I did like the “fall for you” jump-split fake out.) Jessica doesn’t need any gimmicks, just a head on an absolute swivel, swinging around her wig in some most impressive hairography. Ru picks her as the winner, adding another $10k to next week’s pot.

Jessica pulls out the lipstick to reveal it’s Yara’s time to go. (Or is it?!! We’ve got a few more weeks until the halfway point, which is when this “game within a game” should come to a head.)

Next week the girlies sit down for some serious chat on Pink Table Talk (#ifkyk). For now, let’s take stock of where each queen stands in our rankings.

How would you rank the queens?