Halsey shares instantly iconic cover for fourth album If I Can’t Have Love, I Want Power 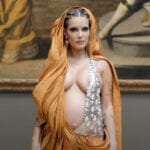 Halsey has unveiled the artwork for their upcoming fourth studio album If I Can’t Have Love, I Want Power.

Sat on a Game of Thrones-inspired golden chair with a matching crown, the singer-songwriter can be seen holding a new-born child with her breasts exposed.

In their caption, Halsey said the concept album is “about the joys and horrors of pregnancy and childbirth,” and that it was important for them that the “cover art conveyed the sentiment of my journey over the past few months.”

The star – who identifies as bisexual and uses she/they pronouns – announced she was pregnant with her first child with her boyfriend, screenwriter Alev Aydin, earlier this year.

She continued: “The dichotomy of the Madonna and the Whore. The idea that me as a sexual being and my body as a vessel and gift to my child are two concepts that can co-exist peacefully and powerfully.

“My body has belonged to the world in many different ways the past few years, and this image is my means of reclaiming my autonomy and establishing my pride and strength as a life force for my human being.

“This cover image celebrates pregnant and postpartum bodies as something beautiful, to be admired. We have a long way to go with eradicating the social stigma around bodies and breastfeeding. I hope this can be a step in the right direction!”

“This cover is magnificent,” said one fan, while another tweeted: “We need more albums about pregnancy, childbirth, and motherhood, ESPECIALLY rock albums.”

Announced last month, If I Can’t Have Love, I Want Power will be produced by Nine Inch Nails’ Trent Reznor and Atticus Ross, and is due for release on 28 August 2021.

Their influence can be felt in an official teaser posted Halsey, which only lasts 10 seconds but showcases their rockier new direction.

Although they experimented with heavier sounds on Forget Me Too with Machine Gun Kelly and Experiment On Me with Bring Me The Horizon, it looks like If I Can’t Have Love, I Want Power will be Halsey’s first proper rock era.

Halsey’s last album, Manic, was released last year to widespread critical acclaim. The album’s lead single, Without Me, was also released to praise and became the singer’s first solo chart-topper on the Billboard Hot 100.

It has also become one of the most streamed singles in history, with billions of listens across Spotify, Apple Music, YouTube and other streaming services.

Follow-up singles Graveyard and You Should Be Sad also peaked within the top 40 on several charts around the world including the UK and US.

Check out the instantly iconic artwork for Halsey’s fourth studio album, If I Can’t Have Love, I Want Power, here or below.

The post Halsey shares instantly iconic cover for fourth album If I Can’t Have Love, I Want Power appeared first on GAY TIMES.