A Pride mural in Liverpool has been vandalised with homophobic slurs 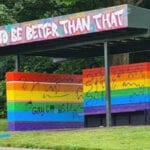 A Pride mural in Liverpool has been hit with homophobic vandalism earlier this week.

The rainbow-coloured mural, which was located in Merseyside park, was commissioned by St Helens to celebrate Pride Month.

Councillor Jeanie Bell of the St Helens Borough Council opened up about the act of vandalism in a statement.

“To say we we’re shocked and disgusted by this would be understating our emotions,” she said.

“This is more than just petty vandalism, this is a hate crime and those responsible should recognise that fact.”

Bell went on to reveal that the vandalism was removed and praised the community for rallying together.

“It’s been heartening to see people in Liverpool rally around the city’s LGBT+ community in the wake of a despicable series of homophobic attacks,” she said.

“But ultimately distressing that we must still battle with a minority who won’t let others live as they want to out of hatred and ignorance.”

“This was an appalling incident in which local artwork was defaced, and we are fully investigating,” he said.

Holden also encouraged members of the community to come forward if they had any leads regarding suspects.

“We will always take reports of hate crime extremely seriously and we will do everything in our power to ensure those responsible for such incidents are dealt with robustly,” Holden said.

The post A Pride mural in Liverpool has been vandalised with homophobic slurs appeared first on GAY TIMES.