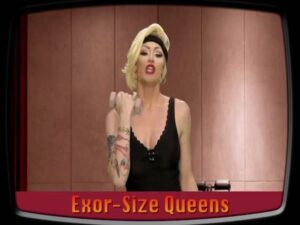 The first true gag of RuPaul’s Drag Race All Stars season 6 has landed, and it’s made the problem with this whole streaming exclusive thing even more apparent.

Imagine the sound heard ’round the world if we (mostly) all saw Laganja drop into that elevated jump split in unison. Picture the scene in bars across the country when she kipped up from her back onto all fours, the singular tidal wave of tweets, the deluge of GIFs and memes that remind you queer people are the quickest and most clever people on the planet.

I’m sure the decision to release episodes at 3 a.m. on a Wednesday as people are just getting excited to leave their homes again was focus-grouped, and whether or not they’re seeing more, less or the same amount of viewers, it’s just not the same experience. It’s disappointing, especially considering what an important touchstone Drag Race has been to keep the queer community together during the last year.

Now, here’s something I never thought I would say: Thank god for a group challenge! Last week’s 13 variety numbers and 36 runway lewks felt like a TV recap Olympic event. (Just kidding, they could never, because everyone would test positive for marijuana, which in the sport of recapping, is, in fact, a performance enhancing drug.) This week’s three team videos kept the show much more streamlined, introduced a little drama and gave us an all-time best lip sync.

Grab a roll of duct tape, and let’s dive in.

An Eye For An Eye, A Lipstick for a Lipstick?

Everyone’s still feeling blue after Jiggly’s elimination last week. We have the ceremonial counting of the lipsticks, revealing everyone but Jiggly and one other queen voted to send Jiggly home. But which remaining queen voted for week one’s winner, Yara?

It’s Trinity! The gals all assume it’s because Yara picked Trin’s lipstick when she was top, but Trinity swears that’s not the case. Instead, she explains Jiggly struggled but worked hard, while Yara messed around for most of the work time and whipped something out. It’s a story backed up by last week’s edit and confessional clips.

I’m with Trinity on this one. Coming in without any personal relationships, that seems like a very fair, rational way to make her choice.

The two seem to move past it very quickly, despite all the gals persistent attempts to stir up some drama between them.

Ru arrives to remind the gals, that in the world of drag, one day you’re in, and the next, you’re out. So, it’s important to have a side hustle. This week, Ru will be splitting the queens into teams to make a commercial for a new enterprise. In a delightfully inane twist, teams are chosen in height order. Yes, it’s very silly, but I like it because it’s transparent, it shakes up social dynamics and it creates an opportunity for Ra’Jah to reference the great “Talls vs. Smalls” war from Real Housewives of Atlanta.

Kylie and Scarlet are playing two ’80s-style aerobic trainers who use their skills to drive the demons out in a deliciously devilish piece of wordplay that adds a creative spin to the team’s “exorcist” video.

They smartly leverage the concept into a story wherein they show up to get Eureka unpossessed through calisthenics, driving out the devil by working her to failure. Eventually, the bodysnatcher would rather quit than keep exercising. (Basically how I feel on every treadmill.) The ending, with Eureka’s character going from client to a member of the Exor-Size Queens is a nice touch.

The judges love the effortless performances from Scarlet and Kylie, but they save their most effusive praise for Eureka’s all-out physical comedy. I mean, the gal knocked the headboard clean off during filming. It’s really nice to see Eureka mature as a performer and learn how to better channel that big personality into her performance.

She’s the clear standout in the group, but, since this is being judged as a group challenge, all three are deemed safe.

Tasked with becoming Olivia Pope-style “fixers,” Pandora smartly steers them away from a sort of Scandal/Ray Donovan-spoof and toward more of a Cellino & Barnes (R.I.P.) personal injury lawyer local commercial vibe. It’s already a favorite genre of Ru, and Pandora has experience creating local commercials for businesses in her native Rochester, NY.

It may be safe to assume Pandora’s fingerprints are all over this script, since it’s loaded with punchlines. As opposed to the other two groups, this is the only one who took funny premises and then actually wrote a ton of jokes.

On top of a strong script, every gurl nails her part. Pandora and Ra’Jah are flawless as the Fix It, Bitch! fixers. There’s a great running joke about how they fix everything with duct tape which is expertly heightened from fixing a meaty tuck to taping down toes on a too-small shoe and then finally just duct taping wigs to faces. Yara is guaranteed to get laughs just being Yara, but it’s Trinity who shines brightest. She hits every beat, punctuates every punchline with the perfect facial expression and has directors Ross and Michelle cracking up even before takes. Just great stuff.

It’s no surprise the team snags the top spot, and Trinity this week’s winning position (and unenviable lip sync assignment). But first …

They’re not escorts, they’re companions! This super group seems doomed from the start. The ideas are popping a mile a minute — much more content than ever could be contained in such a short spot.

Silky sees the writing on the wall, but she’s not the same queen who drew the ire of the fandom during season 11. The blowback from fans, bookers and fellow queens has Silky not only second-guessing her decisions, but forcing herself to stay small and quiet.

Filming is a bit frantic, but Ginger overdelivers in every role. First, as a lotion-applying queen, Ginger pantomimes a little self-love with absolutely expert comic timing, and then later has Ross and Michelle in stitches with her “Richard Slimmons” vocal effect. Not a moment goes by she’s not nailing it.

A’Keria stumbles a bit in her line memorization, but delivers a decent performance alongside Jan as a rent-a-beard date for a closeted kid. I will say, Jan absolutely Daniel Day Lewis’d the role of a closeted teen in a stupid hat. Is this the role she was born to play? However, neither Jan nor A’Keria are too memorable.

Silky plays a few small parts with just a smattering of lines. She does what she’s supposed to, but there’s not a lot of “there” there.

The group gets the hardest critiques on the runway where this week’s theme requires the queens to redo a look from their previous time on Drag Race. Ross loves Silky’s second attempt at We Are Family, but … it bears almost no connection to the original. A’Keria finally wears A’Kaftan proper, not like season 11. The judges love it, and it is beautiful. Jan looks a bit matronly, and Ginger is a bit of a mess, both in terms of outfit and makeup.

Ru declares all four up for elimination, which certainly rubs star Ginger and aspiring star Jan the wrong way. I mean, if you think Jan cracked being consistently safe, this bottom placement seems sure to drive her over the edge.

As soon as the Team Rent-A-Queen and Team Exorcists return to the Werkroom, Ginger drops a delicious and devastating little barb in Jan’s direction, asking what’s it like to break that safe streak? That’s not just reading, that’s friggin’ X-ray vision.

All four bottom girls immediately launch into their pleas, but Trinity stops them to remind everyone that she graciously congratulated the previous weeks’ winners. She hasn’t won a challenge yet, and she’s owed a little feting as well (#fetlife).

Once she gets her due, she has a tête-à-tête with all four ladies in danger (#tête-à-têtelife). She’s overly flattering and clearly tells some queens they have nothing to worry about. But somebody’s got to go!

The gang returns to the mainstage to see this week’s lip sync assassin revealed. There’s a long pause as the curtain drops, uncovering an otherwise blank entrance.

Suddenly, falling from the heavens, Laganja Estranja lands in a thundering split. It’s pure magic. Having recently come out as a trans woman, this Laganja radiates so much more confidence than when we last saw her.

The lip sync is to — gasp — Dula Peep’s “Physical,” a dancefloor banger whose potential was another COVID casualty.

However, this lip sync may save the song and etch the track forever in the annals (I said, ANNALS) of queer herstory. Laganja is on a whole other level, hitting stunt after stunt after stunt. She strips, she dips, she splits. It’s incredible. Trinity is no slouch, either. It’s clearly Laganja’s win, but boy is it fun to watch!

With that, Laganja pulls out the lipstick to reveal it’s Silky getting the boot. Even Ru seems disappointed.

Of course, we know that’s not necessarily the end of Silky’s journey, depending how this whole “game within a game” thing shakes out.

But, for now, let’s take a look at where the queens landed in this week’s ranking.

What did you think of the episode? How would you rank the queens? Let us know in the comments!

Catch up on all our RuPaul’s Drag Race All Stars recaps.