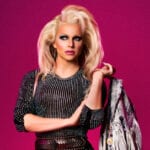 We caught Courtney Act in the original run of Death Drop before Christmas, where she entertained audiences as ’80s pop sensation Shazza. Fans will be delighted to learn that she is returning to the show for its closing weekend, with four performances across 10-11 July. We caught the show a few weeks ago and thought it was a “dazzling and delightfully camp comedy”.

Set in 1991, Death Drop sees a gaggle of guests gather on Tuck Island for a soirée like no other. The tension rises as the outrageous guests reveal their suspicious and sordid pasts, and one by one they sashay away, until at the last, nerve-shredding, side-splitting moment the surviving guests find out who-dunnit!

Courtney said: “‘I’m so excited to return to the West End to reprise the role of Shazza! I hear some new editions have been made – new songs, new costumes, new cast mates! I can’t wait to see the show and then be in it for the closing week!”

Courtney will join Latrice Royale who plays the role of Summer Raines, a glamorous American weather girl living in London, Myra DuBois as The Lady, Don One and will be reunited with LoUis CYfer, Anna Phylactic and Holly Stars who all performed in the show last year. Willam – who is currently playing the role of Shazza – will make her final Death Drop performance on 9 July.

More information can be found here.