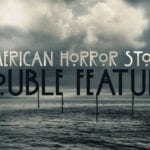 The Glee creator took to Instagram and shared a brand new poster for the season that featured an ominous green alien.

In the spine-chilling teaser, the alien is seen locking lips with a pale bald-headed figure with sharp teeth. The two beings also have a mysterious black pill on their tongues.

This isn’t the first time that Murphy has explored the topic of extraterritorial life. During the Asylum season of AHS, aliens were one of its central characters.

Earlier this year Murphy revealed to fans that Double Feature will be split into two parts.

Over the past few months, Murphy continued to tease the direction of the season with a photo of Grossman and Culkin on a beach in Provincetown – one of the top vacation spots in the US for the gays – and another of the gnarly sharped toothed creatures as they stomp down a dark street.