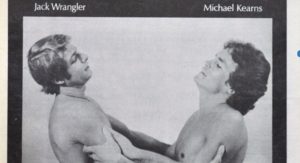 Bay Area Reporter. 3 Queer Eras. Before, During, After a Crisis. Iconic photos and reporting celebrates 50 years

Bay Area Pride Photography Event: “Pride Images, Then and Now with Ron Williams, Jane Philomen-Cleland and Gooch” is part of the 50th Anniversary celebration of the Bay Area Reporter.

Highlighting work by 3 very different Bay Area Reporter photographers at three very different times in the 50 year history of the independent queer communities in San Francisco is quite a lot to take it. It will open virtually on Facebook and Youtube this Wednesday 6pm PT/, 9PM ET

BAR has made available to Towleroad a selection of images and Iconic covers of the Bay Area Reporter that were part of defining our history as much as they represent it. It’s an overview of LGBTQ history over 50 years as much as that of a single news outlet.

There’s much perspective to be had.

Common and not so common things. Softball with cops? An Elephant down Market street

And even our crisis, AIDS and perspectives on it change. People certainly noticed the volume of obituaries then but didn’t fall to their knees overwhelmed by that. It was individual deaths. Now, it’s powerful and compacting.

And, the fast-forward over 50 years really highlights not only the legal and status changes we’ve won, but just how much the fabric of the how we live has evolved incredibly. I see dramatic realignment of what is important in our worlds on up to how we recognize life, lives, our attempts to live them.

That’s what i see in here at least. Your results may vary. But let us know.

**More on the virtual event and the full 50th Anniversary Commemorative edition of BAR to download at the endIf you must, skip there by jumping the numbers below.