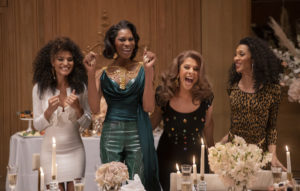 It’s not surprising to hear Elektra claim she was once told by a psychic she was Cleopatra reincarnated, as she does at the top of last night’s episode of Pose, “Something Borrowed, Something Blue.” Everything about her screams royalty, even when she’s down and broke. But this isn’t the same Elektra we saw last.

Unfolding like a CliffsNotes summary of what I wish was a longer final season, everyone seems to be enjoying that “’94 bounce.”

As the title suggests, there’s a wedding afoot, and it’s lavish and over-the-top in a way that might indicate Liza Minnelli could show up at any moment to sing “Single Ladies.” And yet, the most fascinating parts of the episode weren’t about the wedding, but who was paying for it.

Elektra seemingly went full Bethenny Frankel. She started from the bottom, now she’s a mogul. In this case, it wasn’t Andy Cohen’s blessing that made the difference. She’s in cahoots with the mob. After meeting with the recently glowed-up Miss Orlando, Elektra learns of a new business opportunity with the Mafia. They pump some cash into her phone sex operation, franchise it out, cook those books, and, in return, she launders their money squeaky clean.

It may feel like a convenient plot point, but it’s not too out there. There’s a deep, fascinating history between the LGBTQ+ community and the mob, who happened to have a stranglehold on NYC nightlife (including the Stonewall Inn). The Mafia, experienced with speakeasies post-Prohibition, saw an opportunity running a racket through the illegal gay bars (at a price, of course). The Stonewall riots were not just a reaction to the cops, but also to the exploitation at the hands of organized crime. Most of the mob’s influence would’ve been done by ’94 (thanks to a lot of high-profile arrests in the ’80s), but, still, it’s a nice historical reference here.

Elektra’s relationship with the mob seems to yield limitless wealth. She buys a swanky new apartment in which she can eat caviar daily (the B12 keeps her brain sharp for reading), install a cedar closet and enjoy the company of a scorching hot sex worker named Hot Chocolate.

But all that coin is not just for her. She’s spreading the wealth to her children. She clears out the House of Evangelista and puts in some updated furniture, including a large, glass dining room table for Blanca to entertain. She offers Lulu an all-expenses-paid trip to rehab, but Lu ain’t having it. She tells the girls she’s clean, she’s working and she’s got a man. They’re quick to judge, and Lulu gets her moment to tell them how Candy’s death affected her. Now, they need to root her on. It’s a nice moment for a character with a smaller slice of screentime. Given the breakneck speed of the season, for all we know, that’s the end of Lulu’s story.

Angel lifts the mood by announcing she and Papi have set a date. Immediately, Elektra offers to finance the whole thing. It’s sweet, but also one of many scenes that devolves into some heavy-handed (though, admittedly, still emotionally affecting) toasts and speeches throughout the episode.

Papi doesn’t take the news nearly as well. He and Angel already planned a sweet, simple wedding at the courthouse using their savings. He feels emasculated and confronts Elektra in her office.

She and Blanca explain to Papi (and the audience) how much it means to them and girls like them to see Angel have the lavish wedding they never allowed themselves to even dream of. Papi understands and relents, which means it’s time to say yes to that dress.

I’m not going to say it was necessary or good storytelling or vital to the narrative, but who can resist a bridal gown montage? Angel models several, and looks gorgeous in every one, even the ones meant to be a joke. Then, all the girls start trying on gowns. Everyone looks stunning, truly 10s across the board, but Elektra is next level. Wealth looks great on her.

When it’s time to check out, the store owner confronts the girls about not being “real women,” only for Elektra to serve him another of her absolutely devastating takedowns. She didn’t just open and close the library; she lobbied city council, got the permits, built it brick by brick, cut the opening ribbon and then burned that sucker down. It’s some more fan service, of course, but, as a fan, thank you, may I have another?

As satisfying as it was to see him squirm while Elektra dismantled him verbally (and his queer-coded employee got to have his own huffy moment, quitting in response to his employer’s bigotry), it’s not enough for Elektra. She taps her mob connections and instructs them to clear the whole place out.

(Side note: Was anyone else thrown by the butler announcing “Mafia drinks,” like that’s a normal thing to say? That, coupled with Elektra’s pointed description of her wealth as “permanent,” has me concerned this might not be the happy ending we want it to be.)

For now, she’s still rolling deep, throwing Angel a wild bachelorette weekend including pampering at the spa, dinner with all the ballroom girls and even an extended scene with male strippers. (No complaints!) She even gifts all the ladies one of the recently acquired gowns from the transphobic shop owner.

Things aren’t going as well for Papi. He learns his ex-girlfriend is not only dead, but she’s also left behind a baby, his baby. Now the kid has no one, and you know sweet, sweet Papi is not going to turn the adorable five-year-old boy away.

Angel is another story. When Papi tells her about his son, she freaks. She’s still working on her sobriety, and she is not ready to be a mother. She walks out, leaving Papi literally on his knees asking for her to stand by him when he needs her the most.

It’s a heartwrenching note to leave on, no doubt picking right up in next week’s “Something Old, Something New.” Even though, at times, Pose‘s desire to give each of these characters a happily ever after has seemed maybe a bit forced, I find myself anxious about the prospect of bad news. The threat of Angel and Papi’s relationship hitting an insurmountable roadblock (or that Elektra might lose everything she finally worked so hard to get) has my hackles raised.

Perhaps more than other characters here, Elektra and Papi may be the characters who’ve made the most substantial growth, and, as a viewer, it feels fulfilling to see that rewarded. I wish there was a bit more time to build to these rewards — and even the challenges. (I still have whiplash from the reveal of Papi’s son.)

Better yet, let’s get a full spin-off of Elektra working for the mob and running a phone sex empire.

What did you think of last night’s episode?