Kids Ask Lil Nas X About The Closet (Sort of); His ‘Diamond Record’, And His Nicki Minaj Costume; Plus a Response Video 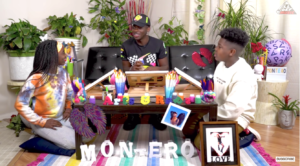 Kids ask Lil Nas X all kinds of things when he appears on the long-running “Arts & Raps,” a Youtube channel that’s hosted play dates with musicians since 2017. They end up talking about all kinds of things, some more carefully than others – though at 22, Lil Nas isn’t many years older than the young hosts, Dilan Patton and Zaria Kelley. The two ask all kinds of questions — some hits and some misses — while painting self portraits in honor of Lil Nas’ new song, ‘Montero’, also the pop singer’s real name.

First they want to know is whether he is an “Industry Plant”.

The first thing Lil Nas needs to know is what an “industry plant” is. That figured out, (he isn’t.) they move on to more salacious questions pulled from songs and his appearances in Tik Tok videos.

Dilan and Zaria, with a little help from the person who laughs from off stage, run through the assorted prepared questions including what it means to be “unapologetically himself” and why he had balloons in his shirt on Instagram.

The producer deals well with issues that might be above some kids by just leaving them alone…after laughing. No one is shocked. Nothing gets buried. And it’s all as modern and educational as it should be. Hope tons of kids watch and stay fans as they grow up and see the options they have for themselves.

When asked about himself for the painting exercise he nails it, “Brave. I’m pretty cool. I’m handsome. I’m pretty nice…. I’m cocky, I’m confident.” Kids ask the darndest things, and and will follow a guy in a pink cowboy outfit anywhere.

This is far from Lil Nas first time at the rodeo. He surprised kids at school, did a kids book earlier this year, and then there was the weekend of virtual concerts on Roblox that saw 33 million visits. No mistake on that number. So no matter how bad your happy hour is on Zoom, the economics of video events mean they are here to stay.

and the best responses to the homophobic responses as a bonus.