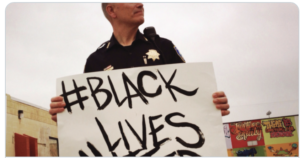 Maybe you remember seeing the picture of a Bay Area police chief holding a Black Lives Matter sign just before Trump was elected? It was powerful to see the Police Chief of Richmond, California in uniform with it. It’s even more powerful after 4 years of further polarizing leadership. And it’s not the only thing Chris Magnus, now police chief in Tucson, Arizona and President Biden’s choice for Commissioner of Customs and Border Protection is known for.

Through the Trump years, he was vocal in his opposition to Trump’s immigration policies and wouldn’t let Border Patrol use his facilities or officers. Most significantly Chief Magnus is widely recognized for his effective results and paradigm-shifting policing. He’s also known for being the first gay police chief to avail himself of marriage equality.

If confirmed, Magnus will be a key figure working on one of the toughest, messiest issues facing the Biden/Harris administration. Confirmation would also make him the first gay commissioner of the U.S. Customs, part of Homeland Security.

Magnus spent his early career rising through the ranks in his hometown of Lansing, Michigan, moving on to become chief in Fargo, North Dakota. In later moved on to become Chief in Richmond, California and 10 years later to Tucson.

The White House described his career saying , “In each of these cities Chief Magnus developed a reputation as a progressive police leader who focused on relationship-building between the police and community, implementing evidence-based best practices, promoting reform, and insisting on police accountability.”

His leadership in Richmond continues to be cited for resetting the relationship between the police and the community and for the dramatic drop in homicides and police shootings. There was controversy even among his officers. The SF Chronicle reported that he “gained nationwide attention for holding a sign reading “Black lives matter” at a peaceful protest in his city, was criticized by his department’s rank-and-file Friday for doing so in uniform.”

His response to the reporter, “When did it become a political act to acknowledge that ‘black lives matter’ and show respect for the very real concerns of our minority communities? This should not be about ‘us versus them.’ It should be about finding ways to build bridges and address the schism that exists between many of our residents and police.”

It was during those years, SFGate reports that “He would marry [Richmond] mayor Tom Butt’s chief of staff Terrance Cheung and said to be the first openly gay male police chief to marry.”

Magnus was openly critical of Trump’s ideas on immigration to the point that he wrote a pro-sanctuary city opinion piece for the New York Times. His position obviously drove the decision to not have his station be part of the Border Patrol operations, and The Observer describes the backlash he faced in his border-adjacent town. Home to more than a few Border Patrol, some took this as a betrayal among law enforcement and it inevitably turned homophobic.

Last October, 2020 Magnus was recognized by the national Police Research Forum and given the top honor for his contributions and leadership. They cited three of his initiatives: Training new Sergeants to handle tough human situations. His efforts to bring wellness and stress management to his departments, and most notably development of a ‘Sentinel Event Review Board’ to investigate policing events in the way the NTSB looks into transportation accidents, rigorously looking to learn from anything systemic. The first report found 32 factors that led to the deaths of two men in Tucson police custody (An incident after which Chief Magnus offered his resignation and was refused.).

The Award nomination described Magnus as “kind and humble…has unshakeable inner strength, deep compassion, and unwavering moral compass, and … He considers honest conversations about difficult topics essential to his role as police chief.”

For some further insights into his thoughts on policing, read a column written by the Chief about how policing must change. I’ve read a lot on policing in the last few years and have not read anyone else saying, “But in the police culture, “studying the film” has been always been frowned upon. The culture tends to shut down conversations at the very moment those conversations need to be taking place. This can be especially true when the discussions involve issues of race.”