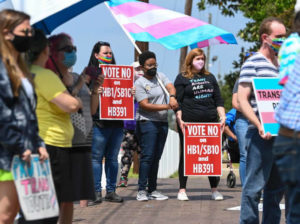 Washington (AFP) – Arkansas became the first US state to ban gender-affirming medical treatment for transgender youth Tuesday when the state legislature overrode a veto of a new law by governor Asa Hutchinson. Rejecting Hutchinson’s argument on Monday that the measure gave the state too much power over the decisions made by trans youth, their families and their doctors, the state assembly voted 25-8 to make the vetoed bill law. The law bans medical and surgical treatments aiming to add, remove or alter a young person’s physical attributes for their “biological sex” as determined at birth. It t… Read More