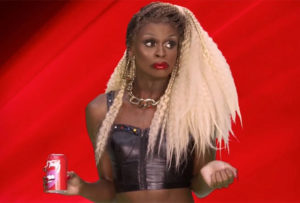 If you’ve caught the recent ads for Bubly Bounce featuring Drag Race alums Vanjie, Latrice and Manila, the idea of a drag queen soda doesn’t seem that far off. The good news is that there is probably some 14-year-old on TikTok right now who would be the brains behind the brand. Because, clearly, not everyone is up to the challenge.

The branding challenge looks different each season, but the core conceit calls for the queens to self-produce a commercial for a product through their very specific brand lens. If you don’t overthink the relevance, the brilliance of the challenge is really the sum of its parts. Being able to self-produce — including concept, storyboard, making a shot list, starring and SINGING THE JINGLE — is a helluva showcase for a slew of skills. Especially in today’s DIY social media dominated landscape, being able to scrap together a short, funny video is a huge advantage.

On top of the creative and production work, the queens also need to be hyper-aware of their “brand.” Turns out, last week’s makeover challenge was just the tip of the branding iceberg. Nearly half the remaining gals crashed and burned on either the creative, the branding or both.

So who popped off and who left us thirsty AF? Let’s dig in.

Fresh off last week’s “Who should go home?” runway pop quiz, Olivia quickly defuses any drama surrounding the gals calling her out. Kandy muses about how much money $2,500 really is and Rosé and Tina snipe at each other about whose going to outlast whom.

It’s a breezy opening leading right into a fun mini-challenge. I love when a mini-challenge has some real competition, and this week it’s a trivia game featuring the always welcome sight of the Pit Crew. The queens prove their mettle with questions about Drag Race quotes and reference, plus Kandy gets to redeem herself (and claim the win) with a sausage-themed math problem.

Ru lays out the challenge: Create a soda, its flavor, its jingle, write the commercial and star. It’s a lot! Even an impromptu Zoom call from season 12 winner Jaida Essence Hall isn’t enough to save the stragglers. (She looked great, but her advice had nothing on Anne Hathaway.) The resulting commercials are all over the map.

Utica, for starters … well, Utica, you see … It’s … You know, having seen her explain it in the workroom, film it, watched the finished product and heard her explain it to the judges, I still don’t get it? It’s an anti-depressant made of sunshine, and you drink it out of a cow’s udder? And you lick the can? Again, Utica gets so caught up making sure she purposefully expresses her weirdness, she loses all its charm and delight.

Kandy, she of “alone in the VIP” meme fame,” has a strong concept for her drink, The K Special. (Get it? It’s Ketamine.) It works, because it’s simple. She looks beautiful in head-to-toe animal print, and the bar scene allows Kandy to be Kandy, which you know the judges love. Is it the most cerebral piece of art I’ve seen? No, of course not, but it satisfies the assignment with its clarity. The judges love watching Kandy, and she delivers. (It’s also a strong episode for Kandy as she opens up about being gay bashed as a youth and how that made her the fighter she is today.)

As usual, there’s everyone else, and then there’s Symone. Carson and Ross can’t even contain their adoration while filming. They start whispering to each other about how great Symone is while she’s still on set! It’s that obvious. Symone’s Sweet Toof is so precisely executed, you could actually pitch this to Pepsi, jingle and all. The judges love the big, bold logo, the catchy jingle and, of course, Symone’s casual, confident delivery. Every joke lands.

After several strong weeks, Gottmik gets tripped up a bit here. Even when storyboarding, it’s clear this is going to be a struggle. The concept is a soda that won’t necessarily make you sexier, but it will make you feel sexy regardless of how you look to others. (Imagine a drink whose primary ingredients are poppers and molly.) It’s not a bad concept, but the devil here is in the details, and Mik fails to make the connections clear. The judges don’t get it, and even the name (Gottmik’s Got SeXXX Sex Juice) is a choking hazard.

Olivia got a lot of flack for not knowing her brand last week, so she feels the pressure this week. Unfortunately, being “smiley” isn’t cutting it. At its heart, the concept is similar to Utica: Drink this, be happy. She struggles to keep her smile at bay for an adequate “before” performance. There’s not much more there, and the judges are non-plussed.

It’s not surprising that Rosé knocks this one out of the park. Already known as a perfectionist, this kind of self-producing is second nature to her. She already has an advantage with her signature color palette, but she wisely uses this opportunity to poke fun at herself, including some of the judges’ ongoing criticism of her. The judges eat it up. It’s the most ambitious of all the commercials, and it’s certainly one of the most successful.

In addition to commercials, the dolls are being judged this week on a BEAST Couture runway. It’s a lot of fun, but Kandy Muse wears one of the absolute worst outfits in Drag Race herstory, and the judges don’t even care. It’s so bad, it’s circled back to good, did another lap until it leapt right up to iconic levels. We’re talking Ornacia 2.0. If we get Halloween this year, I hope everyone dresses as either sexy Scarlet Witch or Kandy Muse in a green latex suit wearing a blowup doll. And the judges are just like, LOL, Kandy, you crazy. Michelle doesn’t even blink at the ALL-GREEN latex suit with inexplicable furry green bra! It feels like Kandy is DARING Michelle to actually hit her. And yet? She’s declared safe. Wild.

Symone and Rosé both rock the runway, and Ru has no choice but to award them both the win. Gottmik’s campy cartoon monster couture and Olivia’s Sully Sullivan-inspired outfit help them secure safety, leaving Utica and Tina to duke it out in the bottom.

The lip sync is the poetic masterpiece, “My Humps,” by the Black Eyed Peas. Utica just kind of does some spooky vamping; it’s not bad, per se, but nothing really memorable. Tina at least peppers in some moments and unique movements that make her performance more compelling. Ultimately, Ru disagrees, opting not to send Utica to reunite with Clara in the big dairy farm in the sky. (Or back to upstate New York Minnesota.) Instead, it’s Tina Burner’s torch that’s extinguished.

And with that, we have only just now eliminated half our queens. Can you believe it? It feels like this season started in 2018. Where does that leave the gals? Check out our rankings below, and leave yours in the comments!

How would you rank the queens?