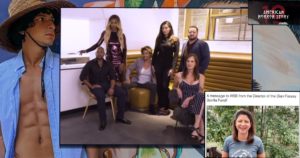 Some days there is a through-line to the news that you don’t want to follow and you try to avoid it and then it catches up and you must. Today is one such day. It’s not all bad and the GameStop Gorillas story is a collision of good.

Check in with your women and others who might need it. This adds up to a very scary week…not without hope in the from of stronger, committed, creative responses. But high-profile terrorist attack on women here, high profile case of a police officer killing a young woman in London has spooked the country, and all of that on top of the news that domestic violence is up 30% in New York, and not unrelated 4 times as many women have lost jobs than men during the Covid year and it’s estimated to have put women in the workplace back about a decade. And then there are the do nothing Republicans with double talk and the unnatural fixation on our trans kids playing sports. We know the cruelty and cynicism in their determination to use them as a wedge, as it was us not long ago.

“The Violence Against Women Act is about saving lives and ensuring justice for survivors who have suffered in silence for too long,” Pressley said in a statement to NBC News. “But until now, Congress’s efforts have overlooked the hurt and harm felt by LGBTQ+ survivors, especially trans women of color. I’m proud that this year’s Violence Against Women Act included my provision to create grants and services dedicated to serving members of the LGBTQ+ community.

More than half of the 11 trans people murdered so far in 2021 have been Black trans women, with trans murders jumping 266 percent compared to this point last year.

How Polyamorists And Polygamists Are Challenging Family Norms [New Yorker]

Must Read of day.

This is a beautifully written long piece about how people are loving and living now, somewhat a result of how marriage equality and changes to the institutions had previously been something of a failure of imagination. The stats and the real stories inside the relationships and how they intersect with neighbors, towns and the law would seem to indicate that rather than achieving conforming normality we have, in fact, contributed to all kinds of people having more choices and being able to live their best lives. And it’s written by Andrew Solomon who I would be moved by and enjoy reading on just about any topic at alll

“When I started researching domestic violence last year, I thought I basically understood it. Some men, driven to distress by things such as unemployment, substance abuse or mental illness, were unable to control their anger, and took it out on the person they loved the most. We’ve all said and done things we’re not proud of in relationships – I thought domestic violence was just the extreme extension of that.

It took about two weeks for that notion to be demolished.” — Jess Hill [Guardian]

Facebook Inc. Chief Operating Officer Sheryl Sandberg said the social-media company is extending its paid leave policy to workers who are the victims of sexual assault and domestic abuse, at a time when violence in homes is on the rise. All employees globally will be able to take as many as 20 paid days off if they or a relative have been the victim of a crime.

Reddit investors ‘adopt’ 3,500 gorillas in less than a week

A message to WSB from the Director of the Dian Fossey Gorilla Fund! from r/wallstreetbets

Domestic violence during the pandemic

“Domestic violence has been magnified by the covid-19 pandemic in two senses: incidence has increased globally, and the presence of domestic violence within all societies has also been revealed more clearly, alongside other adversities and inequalities.” —BMJ EDITORIAL

“President Biden, who wrote the law into existence as a senator in 1994, has made strengthening it one of his top domestic priorities during his time in office, and Wednesday’s vote was the first significant step toward putting it back into effect after lapsing under President Donald J. Trump. …

… several conservatives accused the majority of using a law meant to protect women as a Trojan horse for a “far-left political agenda” on gun control and gay and transgender rights while holding hostage a clean reauthorization of the bill….

Perspective | ‘It’s race, class and gender together’: Why the Atlanta murders aren’t just about one thing

The Washington Post – Monica Hesse – Mar 18, 8:24 AM – Here is how local law enforcement on Tuesday bafflingly explained its thinking about the Atlanta-area shooting suspect who had confessed to killing eight people, including six Asian women, at three local spas: “He apparently has an issue…

Senate confirms Xavier Becerra as the secretary of health and human services.

These L.A. Gay Bars Are Going Extinct – And Their Landlord Won’t Help [Them]

Who Is Timothée Chalamet’s Girlfriend? What We Know About His Love Life